Styrofoam is the most popular material for building insulation: from the foundation to the roof. If traditional white boards have been used in construction for more than half a century, the last decade has also produced modern grays, which are made of expanded polystyrene enriched with refined substances such as graphite. These additives have the ability to reflect or absorb infrared radiation, which can significantly reduce the thermal conductivity of expanded polystyrene boards. 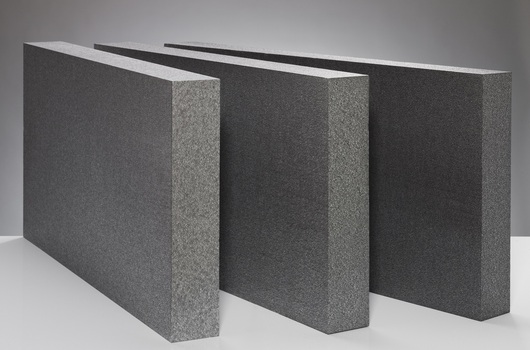 Graphite EPS today is part of the rational use of energy in construction. Graphite plates have better thermal insulation properties compared to white ones. As a result, to achieve the same effect of thermal protection of the building, we need thinner plates of gray foam, compared to white.

The lower the value of the coefficient λ (lambda) of polystyrene, the more effectively it protects the building block, significantly reducing energy consumption for heating. Therefore, if we choose graphite polystyrene with a coefficient λ = 0.031 W / mK and a thickness of 15 cm for insulation, it should be remembered that to obtain the same thermal protection of the wall using ordinary white foamed polystyrene with a value of λ = 0.044 W / mK requires use slabs 21 cm thick.

Graphite polystyrene is increasing of interest to consumers.

In addition to the possibility of installing thinner plates, significant advantages when choosing graphite expanded polystyrene are also:

Graphite EPS is of increasing interest to consumers, although it is about 25-30% more expensive than traditional white, but we save much more money on the finish. Its use is one of the most modern, and at the same time the cheapest methods of thermal insulation in energy-saving and passive construction, in accordance with the requirements of European legislation.